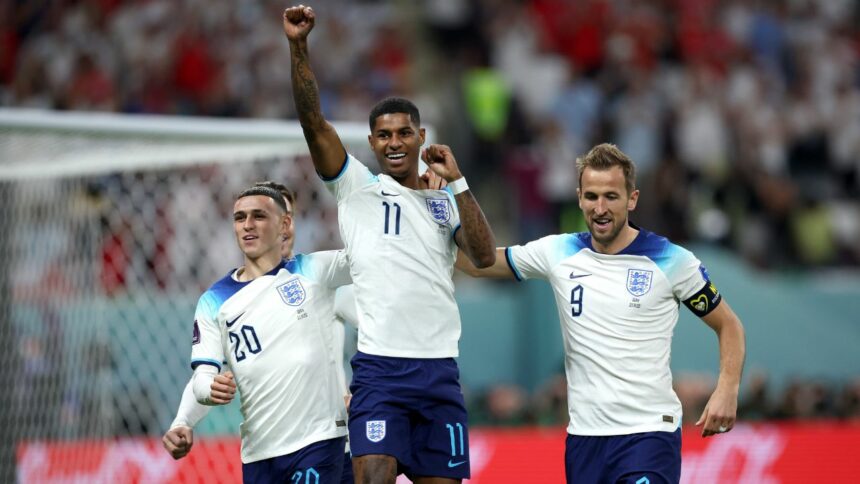 England thrash Iran in their opening game of the FIFA World Cup 2022 .The Three Lions defeat Iran in the Group B encounter by a huge margin. The group has the world toughest teams in their ranks with an average of world ranking 15. England dominated Iran from the beginning of the match and earned a great score of 6-2 victory.

England couldn’t have wished for a better start to their 2022 World Cup campaign as they played Iran and made goals from Bellingham, Saka, Sterling, Rashford and Grealish. Iran’s keeper Beranvand suffered from a head injury and he came for a cross and clashed with a teammate and then the match started slowly .

Time takes almost 8-9 minutes for the keeper to be removed from the pitch regardless of strict impact protocol being introduced by the FIFA of the tournament, and within a limited period of time the match started early, England’s Harry Maguire came close with a powerful header that crashed against the bar.

Finally in the 35th minute of the match Dortmund’s Bellingham opened the scoreboard, guiding in a header from a whipped cross from Luke Shaw. England’s second shot was made by Maguire who was in the 43rd minute after cushioning Shaw’s cross and setting up Bukayo Saka, who fired the ball into the top right corner.

And the third was made by Raheem Sterling just before the break and he crossed the ball bottom right. These three Lions ruled the match in the second half of the match, with the help of Bukaya they grabbed his second one again as he danced past a few Iranian defenders and steered it into the bottom corner.

Iranian fans, who had been in good voice during the first half, began to leave just as Taremi lashed a fine strike past a helpless Pickford.  Today’s victory will be a huge morale boost for England, who will be clear favorites to top the group, which includes Wales and USA.

Iran wants to give a  better performance for their upcoming matches, if they are to stand any chance of progressing. They have never made it past the group stage at a World Cup.