New Zealand will take on England at the Gabba. This is the second game at the historic venue after the clash between Zimbabwe and Bangladesh.

New Zealand kickstarted their tournament in a tremendous fashion after beating Trans Tasmanian rival Australia by a massive 89 runs. The Black Caps garnered 200 runs in the first innings and then defended the total after closing up Australia for a paltry 111.

The second game with Afghanistan was washed out due to rain and they shared a point each. The next opposition was Sri Lanka where Kane’s army once again edged past the Asian Champions and gathered 5 points, thereby crowning the Group 1 table.

England didn’t really start the competition in the best possible way. Despite winning by Afghanistan, the Jos Buttler-led side struggled to chase down a target of 112 runs offered by Afghanistan. In the next game, they were at the receiving end of defeat against Ireland, which was highlighted as another upset of the tournament after Namibia beat Sri Lanka in the opener of the Round 1 stages.

In their third game, England shared one point with urn-rivals Australia where rain played the spoilsport. They have 3 points to their tally and have a better net run rate than Australia. A win against New Zealand shall certainly make their qualification chances firmer.

A total of 22 T20Is between these two sides, in which, England have won 13 games, and New Zealand have won 8 matches. One of the T20I matches was abandoned due to rain. Overall when it comes to the shortest format, England have the upper hand.

England and New Zealand have an equal record when it comes to the T20 WC, as they have played six matches and won three matches apiece.

The surface at the Gabba has historically gotten better as the match progresses. The team bowling first will definitely get an edge in the contest as the new ball does move around a bit in the early part of the innings. The team winning the toss would be inclined to bowl first at this venue.

Both the teams on paper look balanced, it’s tough to choose a winner. New Zealand are high on confidence but England have a formidable unit. England might get over the like in this encounter as they will come all guns blazing in this encounter. 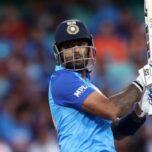