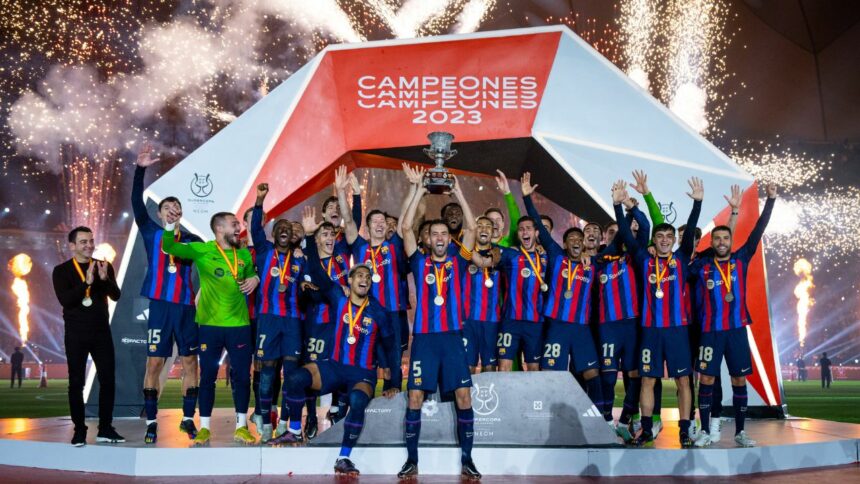 Pablo Martin Paez Gavira aka Gavi, the 18 year old golden boy leads Barca to a 3-1 victory over arch-rivals in the Super Cup final. The teenager was involved in all three Barcelona goals with a goal and two assists. Gavi became the second youngest Barcelona player to score in the Clasico and youngest to score in Super Cup final. The victory handed over Xavi his first title as a coach of the Catalan side.

Barcelona with the victory over Real Madrid won their 14th Spanish Super Cup which is the most in the competition’s history. The second closest happens to be Real Madrid with 12 Spanish Super Cup titles. Barcelona and Real Madrid have faced each other in Super Cup finals 8 times including the recent fixture and this is the second victory for Barcelona with Madrid winning it six times. Xavi has won his first title as the coach of Barcelona after winning 27 titles as a player. This is the first title post Leo Messi era and the last title that Barcelona won without Messi being a part of the squad is 1998/99 La Liga title. Incidentally the 1998/99 La Liga title was the first of Xavi’s title in his career as a player of Barca.

Gavi leads Barca with a man of the match performance

Xavi went with a four man midfield for the Clasico final with Busquets, De Jong, Pedri and Gavi. Araujo was deployed at right back to counter Vinicius’ threat. Balde got an opportunity to start ahead of Alba with Kounde and Christensen forming the centre back duo. Lewandowski and Dembele formed the attack and Ter Stegan was guarding the post. Ancelotti lined up with a 4-3-3 giving Camavinga a spot to start in the midfield along with Kroos and Modric. Benzema, Vinicius and Fede Valverde formed the front three. Carvajal, Militao, Rudiger, Mendy formed a back four ahead of Courtois between the goal post.

Xavi’s men were dominating the game from the word go and looked at ease when compared to Madrid. Their midfield was putting up a show and created more opportunities to open their goal count. Gavi was having one of his best match on the big night of Clasico and he scored the first goal for the Blaugranas. Lewandowski assisted with an excellent pass for the youngster to score his first Clasico goal. Gavi returned the favour by assisting Lewandowski within the next ten minutes and gave Barcelona a two goal lead at the half time.

Lewandowski, Gavi and Pedri combined for Barcelona’s third goal where Pedri finished it off with ease from Gavi’s cross. The game was sealed from the third goal and Madrid had their first shot on target as late as at 80th minute. Benzema scored a consolation goal for Madrid in the final minutes. Barcelona won the Clasico with a 3-1 victory at King Fahd Stadium. Gavi had involvement in all three goals and won the man of the match award.

India vs Srilanka : Top 5 Performers for India
Next Article