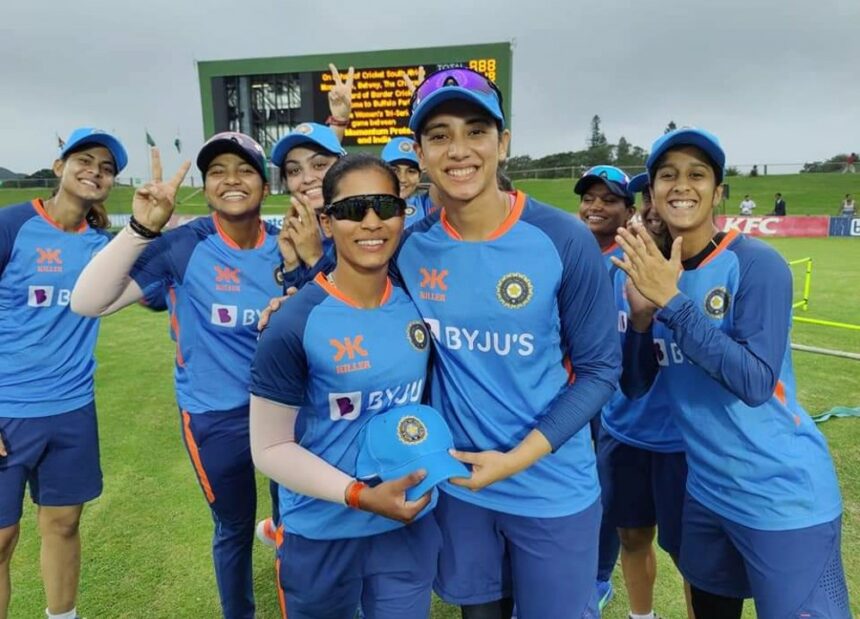 India began their build up to the ICC T20 Women’s World Cup on a positive note as the Indian women’s team downed hosts South Africa in the first match of the women’s Tri-Nation Series.

Taking on the hosts at Buffalo Park the Smriti Mandhana-led side put up a solid show to hand South Africa on twenty seven run loss in the first game. The Indian women’s team was led under stand-in skipper Mandhana, after captain Harmanpreet Kaur was ruled out of the opening match due to illness. Debutant Amanjot Kaur put up an impressive display to bag the player-of-the-match award and guide India to a comfortable win in the end.

After being invited to bat first, the Indian team found themselves in trouble early as they were reduced to 69/5 in 11.4 overs. Coming in at no. 7 Kaur turned it around for the visitors. Kaur along with the experienced Deepti Sharma guided India to a match-winning target.

The debutant, along with her senior compatriot, added 76 off 50 for the sixth wicket, to turn India’s innings around. While Deepti scored 33 off 23, Kaur top-scored on her debut with a 30-ball 41. Opener Yastika Bhatia was the other scorer for the Indian women’s team as she added a crucial knock of 35 off 34. Deepti and Amanjot’s match-winning stand saw the Indian women’s team post 147/6 in 20 overs.

After the duo played their role with the bat, the spinners of the Indian women’s team stepped up to guide the visitors to a comfortable win. Deepti led the attack with the ball with a three wicket haul, while Devika Vaidya picked up two. Rajeshwari Gayakwad, Sneh Rana and Radha Yadav picked up a wicket apiece to restrict South Africa to 120/9. Amanjot chipped in with the ball as well, bowling an over and conceding just six runs.

Following the match, Amanjot said, “I was very happy to contribute to the team’s win. Never thought I would be playing like this, it was a good opportunity and glad that I grabbed the opportunity. Was just hoping to get some runs. Deepti calmed my nerves, it’s my debut, and she guided me well. Told me just take singles and bat deep. That really helped.”

Meanwhile, speaking during the post-match presentation ceremony, captain Mandhana said, “We spoke before the match that we need to show our character and the team did that. Partnership between Amanjot and Deepti showed that. Our bowlers then did their job on this pitch.”

The Indian women’s team will next take on the West Indies women’s team on Monday (Jan 23) at the Buffalo Park.