In the second match of the ICC T20 World Cup 2022, United Arab Emirates (UAE) locks horns with the Netherlands at Simonds Stadium in Geelong.

This is a Group A fixture and will begin at 1:30 PM IST on Sunday.

This is the second time the team has qualified for the T20 WC.

UAE couldn’t qualify for the main round of the Asia Cup.

They were left shell-shocked by the defeat against Kuwait in the first match of the Asia Cup Qualifier.

In a recent T20I series against Bangladesh, they played well and gave the experienced Bangladesh side a run for their money.

Although Bangladesh didn’t allow for any embarrassing result, UAE was in the contest for most of the series.

The Dutch team is famous for causing upsets in major ICC tournaments. The first thing that comes to mind is them stealing the match against England in 2009, But that was it for the Dutch side in the second edition.

Qualifying for Super 10 back in 2014 was their best performance in the showpiece event while making the Group Stage exit in back-to-back editions of 2016 and 2021.

In total, the Netherlands have played 15 WC fixtures, winning 5 and losing 9.

The Netherlands are the favourites to win this encounter. Although the head-to-head record says the battle is equal.

UAE has a slightly lesser chance to edge past their opponent. It is important to start with a win.

Once you lose the first match, it is always tough to raise yourselves. With Sri Lanka in the group, all know the battle is about finishing second in the group and qualifying for the next round as A2.

Netherlands and UAE have met 8 times in the shortest format, with both winning 4 matches each. 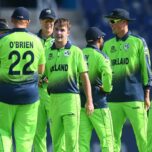 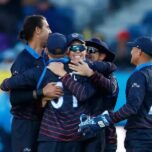