Pakistan are yet to open their account in the points table, they lost to India in their first and Zimbabwe in their second encounter, both matches went down to the wire and they finished on the losing end. The men in green will need to play out of their skins against the Dutch side and register a comprehensive victory against them to boost their net run rate as well.

Shaheen Afridi and co need to stand up and deliver in this encounter. They would also want their skipper Babar Azam to lead front the front and come up with a match-winning knock.

The Netherlands have also lost their first two matches in the competition and will look to give a strong challenge to Pakistan and open their account. The match is to be played at the bouncy and fast-paced track of Perth.

The Dutch bowling has been decent it’s the batting that needed to stand up. Vikramkeet Singh has shown glimpses of brilliance and needs to come up with a substantial knock. Bas de Leede has put up some valuable all-round performances throughout the tournament and will be one of the players to watch out for in this encounter.

Both teams have clashed only once in the shortest format and that match was won by Pakistan. This was also their only meet-up in the T20 World Cup as well.

The pitch at the Perth Stadium is expected to provide assistance to the pacers. The new ball bowlers will look to take wickets upfront and restrict the opposition. Spinners will be handy in the middle overs. The skipper winning the toss might want to have a bowl first.

Pakistan will be strong favourites to win this one, Netherlands have a tiny chance but the men in green will be charged up after their loss against Zimbabwe. 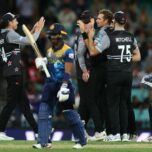