Pakistan have played three matches, winning one and losing two and are in 5th place in the Group 2 points table. They could have won all three as the games were stolen from their grasp at the last moment.

The men in green lost the first game to India by 4 wickets, they choked in the second game, chasing 131 against Zimbabwe. Then they needed to win all three matches and need to pray that the other results go their way. Pakistan went on to defeat the Netherlands by 6 wickets in their last game.

The bad news that came from the Pakistani camp was that Fakhar Zaman was injured and ruled out of the tournament, and Mohammad Harris has been named as his replacement.

The men in green need to beat South Africa by a good margin and hope for other results to go their way. Babar Azam needs to stand up for the team while the bowlers look in good rhythm, the middle order looks fragile.

One of the best-performing teams going around in the Super 12s is South Africa. To be honest, they too could have won three in three, but the unfortunate rain played spin sport in the game against Zimbabwe. Later on, they thrashed Bangladesh and then gained a hard-fought win over the tournament favourites India.

Apart from the form of their skipper Temba Bavuma, everything looks sorted for South Africa. They have one of the most lethal pace attacks in this tournament. On the batting front, the likes of Quinton de Kock, Aiden Markram, Rilee Rossouw and David Miller are in good touch.

The equation for South Africa is simple they just need to win this game, and they are through to the semi-finals where as Pakistan need to win all their matches and hope for other results to go their way.

Both South Africa and Pakistan have battled against each other 21 times in T20I cricket, and the Proteas side have won 10 of the games. While 11 matches have been won by the Men in Green as they have a slight upper hand against their counterpart.

Pakistan have a clear lead when it comes to the T20 World Cups, as they haven’t lost to South Africa in all three encounters in the mega event.

The pitch at SCG is slightly slower compared to the other ground in Australia. Although the fast bowlers will get pace and bounce. A total of around 160-170 will be the par score on this pitch. The team who wins the toss will look to have a bowl first as teams chasing have had a good record on this ground.

Both teams have a lethal bowling attack and look well-balanced, it’s hard to choose a winner but South Africa will have a slight advantage in this encounter. 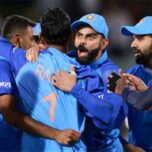