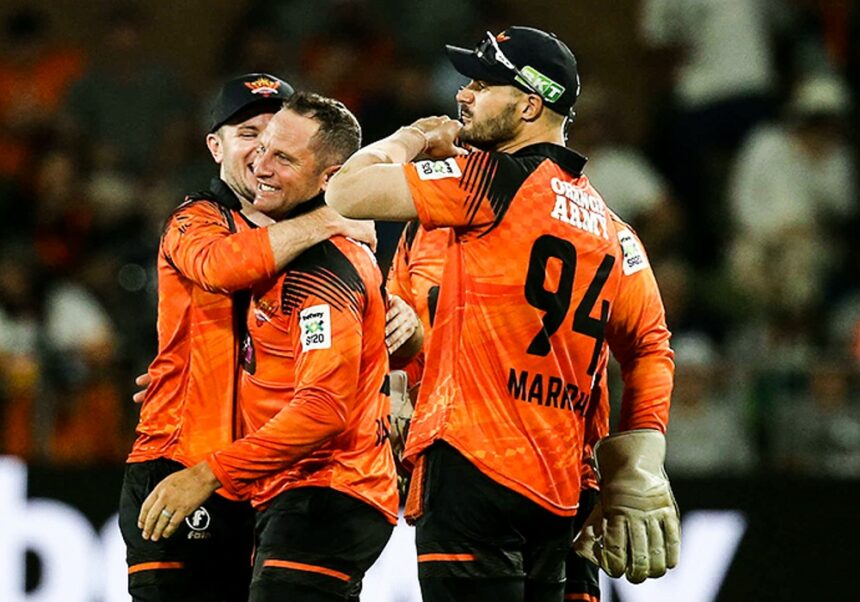 Quinton de Kock-led Super Giants won the toss and elected to field first. It that was the only thing that went Super Giants way as Eastern Cape dominated the proceedings from the very onset. Rossington and Merwe stole the show at St. George’s Oval.

After being sent into the Adam Rossington set the stage on fire with an explosive knock. Rossington and Jordan Hermann put up a sizzling opening stand of 100 off 50 to hand Eastern Cape a strong start.

Opener Rossington top-scored for Sunrisers as he scored at a scintillating strike rate of 240. Rossington smashed a 30-ball 72 to set Eastern Cape up for a strong total. In his blistering knock, Rossington struck ten boundaries and four sixes. Herman struck a solid 44-ball 59, which included nine boundaries and a six.

After the opening pair set the stage for a big total, captain Markram and Tristan Stubbs took the score over 200. While Markram scored an unbeaten 44 off 34, Stubbs’ 13-ball 27 saw Eastern Cape post a match-winning total of 210/2.

In reply, Durban’s Super Giants folded like a pack of cards. After the batters dazzled, Roelof van der Merwe led the bowling attack. Merwe turning in scintillating figures of 6/20.

With a 200+ score on the board, the Super Giants struggled from the onset, losing both openers early. The Giants failed to get going with the willow as Merwe engineered a massive collapse. Merwe led the attack with a six-wicket haul. Super Giants folded for just 87 in 14.4 overs as JJ Smuts, skipper Markram, Marco Jansen and Mason Crane clinched a wicket each.

Sunrisers Easter Cape is placed second on the points table with four wins from seven matches. Durban’s Super Giants is languishing at the bottom of the table with just two wins from six matches.