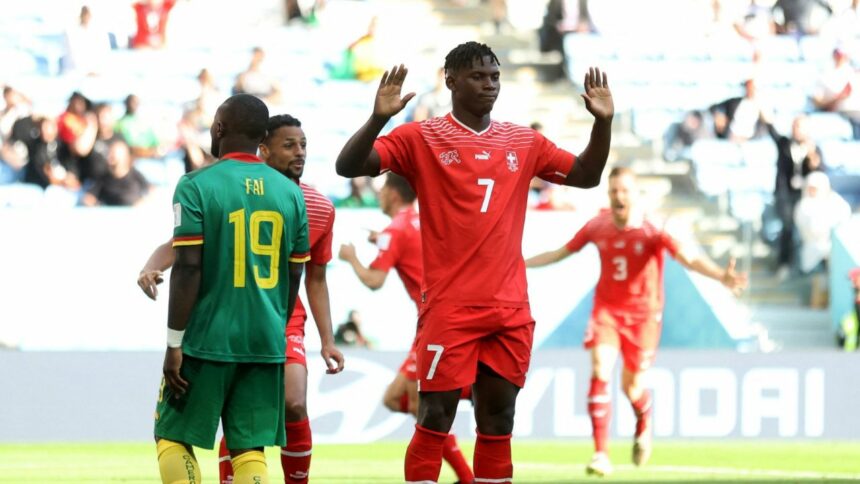 Breel Embolo had a wide variety of feelings after scoring the sole goal of Switzerland in their 1-0 triumph against Cameroon, the nation in which he was born, in the first game of Thursday’s World Cup play. To start the competition on the right foot, securing three points in a challenging Group G that included Brazil and Serbia was important.

The Swiss did not have it all their way in the first half, and Cameroon seemed to be the more threatening side early on; nevertheless, they could not capitalize on any of their opportunities to score goals.

The match was by no means a nail-biter, and shadiness was there on both teams. However, Switzerland’s patience undoubtedly paid off in the end. They grew into the game and were the better of the two teams after the interval, having weathered somewhat of a storm in the first half.

Over the match’s ninety minutes, Cameroon had a more significant number of opportunities and shoots. However, Yann Sommer, who has a history of excelling in international competitions, showed why he should be considered the better goalkeeper by denying all of Cameroon’s attempts. Because of his play, the game’s outcome was determined by a single goal.

Embolo scored the only goal in the match shortly after the halftime break. He did so by finishing off a well-worked move that culminated in Remo Freuler deftly sending Xherdan Shaqiri to the byline to cut around to finish past Andre Onana. This move culminated in a well-worked move that began with Remo Freuler sending Xherdan Shaqiri to the byline.

Embolo chose not to celebrate the goal of showing respect to the African country of Cameroon and its people. Given that Embolo was born in Cameroon, his emotions were evident when he made his decision.

The next time we’ll see any of them in action is on Monday, November 28, when Switzerland will play host to Brazil and Cameroon will face off against Serbia.

Read More : The Wonderkid Of Spain Gavi Becomes The Youngest Player To Score In The Tournament Since Pele In 1958