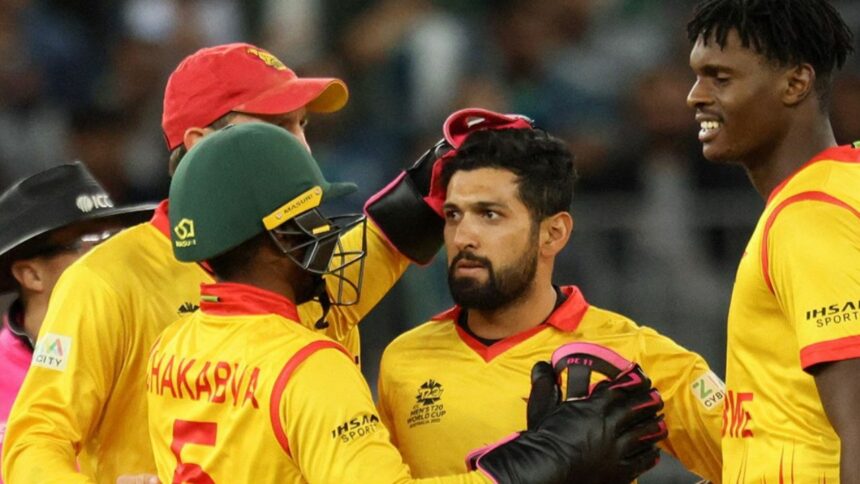 The world witness yet another shocker in the ICC Men’s T20 World Cup 2022 as Zimbabwe defeat Pakistan by one run at Perth.

Contents
Good Start and a late collapse Zimbabwe pull of an absolute heist at Perth Last over Drama : Zimbabwe hold their nerveCaptain’s Corner

After a heart wrenching loss to India in their opening encounter last Sunday. Pakistan loose to Zimbabwe in a low scoring thriller after they failed to chase down 131 runs.

Good Start and a late collapse

Earlier in the day Zimbabwe captain Craig Ervine won the toss and elected to bat first. The decision was viewed as bit of a surprise by everyone but their openers backed their captain by taking down the Pakistani bowlers early in the powerplay.

Both the openers scored 38 Runs in the first 4 overs as Zimbabwe were on track for a good score. They lost two back to back wickets in the 5th and 6th over which peppered their run rate a bit.

Sean Williams and Sikandar Raza carried rebuilt the innings and Zimbabwe were once on track for scoring more than 150 Runs.

Once again Pakistan struck back with flurry of wickets. Zimbabwe were 93/3 in 13 overs. Shadab Khan picked up 2 wickets in successive balls in the 14th over dismissing Sean Williams and Regis Chakabva.

In the very next over Mohmmad Wasim dismissed Sikandar Raza and Luke Jongwe were back in the dug out as Zimbabwe lost 4 wickets for zero runs.

Ryan Burl and Brad Evans added some useful runs in the backend of the Zimbabwe innings as they end the innings at 130 Runs.

Zimbabwe pull of an absolute heist at Perth

Pakistan were off to a slow start. Babar Azam once again failed to score as he was dismissed for 4 runs by Brad Evans in the 4th over. Mohmmad Rizwan after smashing 3 fours was cleaned up by Blessing Muzarabani for 14 Runs.

Pakistan looked in a spot of bother struggling at 25/2 by the end of 5 overs. Shan Masood steadied the innings with a quick fire 44 runs in 38 balls smashing 3 fours. Shadab Khan provided the much needed support as the duo added 52 runs for the 4th wicket.

Pakistan were crusing at one point and we’re quite comfortable of chasing the target down. Sikandar Raza turned the tables up side down with two back to back wickets in 14th over.

In the 16th over Sikandar Raza once again struck with a crucial blow by dismissing Shan Masood for 44 runs and Pakistan were in all sorts of trouble heading into the final 5 overs.

Pakistan needed 32 runs of the last 4 overs. Mohmmad Nawaz and Mohmmad Wasim managed to take the match to the final over.

With 11 runs needed of the last over. Nawaz hit one over covers for 3 runs and the very next ball Mohmmad Wasim smashed a back of the slower ball past the bowlers had for a 4.

Pakistan needing 4 runs in 4 balls Wasim hit straight to mid on for a single. Mohammad Nawaz once again became the culprit of Pakistan’s loss as he failed to score of the 4th ball and Pak needing 3 runs in 2 balls. Brad Evans bowls back of the length ball to Nawaz as Nawaz hits straight to Craig Ervine and losses his wicket.

Pakistan needing 3 runs to win of the final ball fail to score the 2nd run as Sikandar Raza throws the ball to the keeper and the Keeper knocks the bails off as Zimbabwe register an historic win at Perth.

What a comeback Zimbabwe has made to ICC T20 World Cup. They were out couple of years ago and now they pulled of an heist in Australia.

Craig Ervine | Zimbabwe skipper: So special. Especially for the work we did to get into the Super 12s. We did not want our tournament to end there. We wanted to come in and play some really good cricket against top teams and we did that exceptionally well today.

I thought after our batting performance, we thought we were maybe 20-25 short, but I thought our seamers hit their straps early on. Raza again came to the party as he always does and picked up a few crucial wickets in the middle there.

I think he’s (Raza) got three Man of the Matches, so I’m gonna be broke by the time we get home. Also I want to thank the Zimbabwean supporters that came out today to suppport us. You guys really lift our spirits wherever we go, so special thanks.

Babar Azam | Pakistan skipper: We would have taken 130 at the halfway stage. Very disappointing performance, we are not up to the mark in batting. We have good batters but both openers got out in the powerplay.

When Shadab and Shan were building partnership, unfortunately Shadab got out and then back-to-back wickets that pushed us into pressure situation. First 6 overs, we haven’t used the new ball well but we finished well with the ball. We will sit out, discuss our mistakes and we will train hard and come back strong in our next game.

Sikandar Raza | Player of the Match: I am lost for words, my mouth’s dry probably because of the emotions I am going through at the moment. I can’t tell you how proud I’m of this bunch of boys. The way our seamers started at the top, was just unbelievable and the way we backed it up in the field and the way we kept believing, really lost for words. 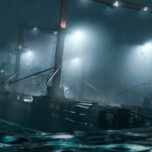 MODERN WARFARE II “DARK WATER” TO THE SURFACE
Next Article