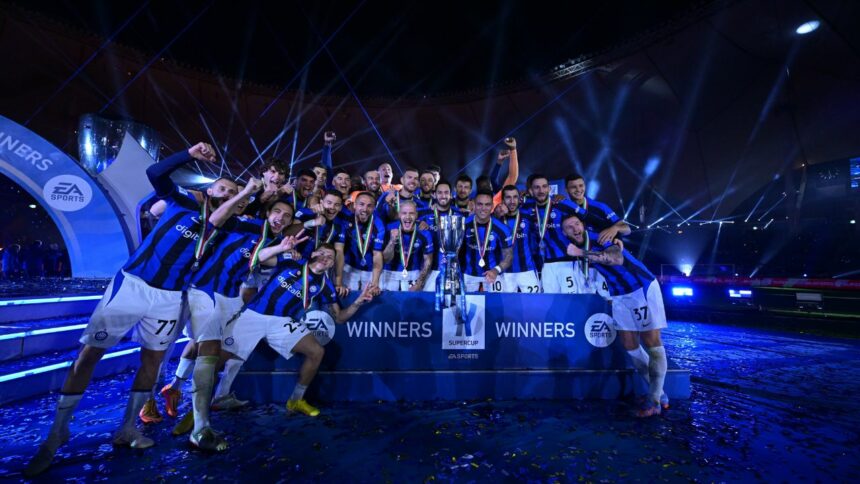 Saudi Arabia hosted the Milan derby in Supercoppa Italiana within three days of El Clasico final from Supercopa de Espana. The derby went in favour of Nerazzurri with a 3-0 score line thanks to goals from Dimarco, Dzeko and Lautaro Martinez. Inter Milan have successfully defended their title after defeating Juventus in last year Super Cup.

AC Milan and Inter Milan faced at the King Fahd International stadium, Riyadh. Inzaghi went with a 3-5-2 formation playing Dzeko and Lautaro Martinez up front. Calhanoglu was up against is former team with a title at stake. Pioli’s AC Milan fielded a 4-2-3-1 formation with the likes of Giroud, Leao and Theo Hernandez starting. Inter straightaway got into serious business with Dimarco’s opener in the 10th minute. Dzeko was at the heart of the goal with a defence splitting pass. Inzaghi’s men doubled the lead at 21st minute from Dzeko’s strike. The Rossoneri were completely out of sorts and were looking uncomfortable in dealing with their neighbours. Milan were trailing by 2 goals at half time and had a big task in their hand for second half.

Pioli made some changes to turn the tide in their favour but the performance from his side was uninspiring. Inter were superior to the Italian champions and they found the back of the net for the third goal to kill the fixture. Skriniar’s long ball was brilliantly converted by Lautaro Martinez in the 77th minute and the Argentine pulled out his compatriot Messi’s famous El Clasico goal celebration from 2016/17 La Liga fixture. Inspite of having possession for majority part of the game AC Milan were unable to threaten Inter’s defence and lost the fixture 3-0. The Supercoppa title handed over Inzaghi his third with Inter Milan after winning Coppa Italia and Supercoppa Italiana last season.

The victory against AC Milan handed over 7th Supercoppa Italiana title for Inter. They have gone level with their arch rivals and neighbours AC Milan and trial only behind Juventus who are at top spot with 9 titles. AC Milan edges ahead of Inter with 5 runner up finishes compared to Nerazzurri’s 4 runner up finishes. Inter and AC Milan will now shift their focus back to Serie A to fight for the title. Inter are currently at 4th spot with 37 points, 10 points behind leaders Napoli. AC Milan are at second spot in the league with 38 points, one more than Inter.