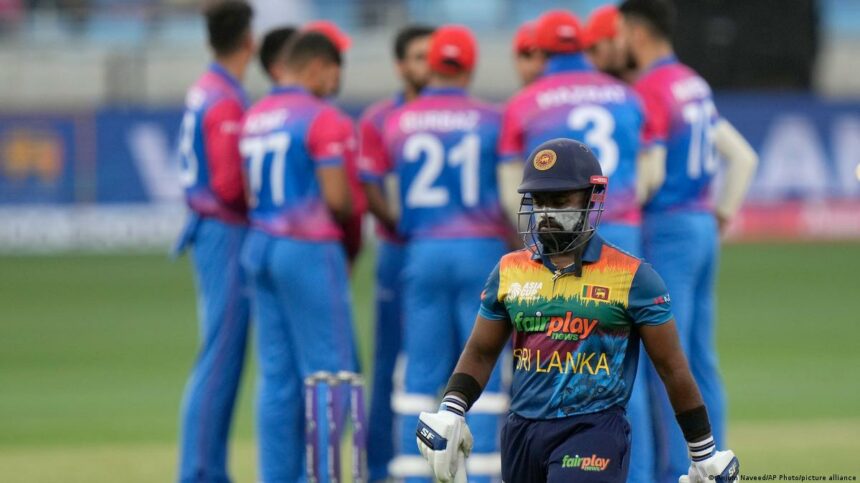 Afghanistan won the toss and decided to bat first.

Rahmanullah Gurbaz and Ibrahim Zadran gave a good start to the team as they scored 84 runs for the first wicket.

Gurbaz was the first man to fall for Afghanistan in the 15th over picked up by Wanindu Hasaranga but a good platform was set by him.

Ibrahim Zadran continued his innings and Rahmat Shah tagged along with him. They batted together for nearly 24 overs and put together 118 runs in the partnership giving Afghanistan a very solid platform to capitalize on.

Ibrahim Zadran went on to complete his first ODI century. He was ultimately dismissed in the 42nd over by Maheesh Theekshana after he scored 106 runs off 120 balls.

The platform that was laid by the top order was fully utilized by Najibullah Zadran in the end.

He played a quickfire 42 off 25 and helped Afghanistan to a respectable total of 294 runs for the loss of 8 wickets in their 50 overs. It took some brilliance from the Sri Lankan bowlers in the death overs to restrict Afghanistan to below 300.

The pick of the bowlers for Sri Lanka was Wanindu Hasaranga, who struck up a couple of wickets for 42 runs in his 10 overs.

Afghanistan managed 294 runs in their 50 overs. A total that looked like would reach 320 at one stage was cut short by the brilliance of the Sri Lankan bowlers in the death overs.

In reply, Sri Lanka didn’t get off to a good start as they lost Kusal Mendis in the fourth over, who departed after scoring 1 run off 5 balls.

Skipper Dasun Shanaka led from the front, played a valuable knock and bulit a partnership of 47 runs for the fifth wicket. Sri Lanka were struggling at 137 for the loss of five wickets in 23.5 overs.

Pathum Nissanka played a fantastic knock of 85 runs off 83 balls and once he got it, it was a downslide for the Sri Lankan side.

Sri Lanka were bundled for 234 runs in 38 overs. Wanindu Hasaranga was the last man to get out, and he scored a brilliant 66 runs off 46 balls.

Fazalhaq Farooqi was the pick of the bowlers for Afghanistan as he scalped 4 wickets giving away 49 runs in 9 overs.

Afghanistan won the match by 60 runs.