Travis Michael Kelce is a football player with the American Football League. He competes for the National Football League’s Kansas City Chiefs at tight end (NFL). Kelce has a storied history with the Kansas City Chiefs. The multi-sport athlete, born on October 5, 1989, began his football career as a quarterback for the Tigers in high school before receiving a scholarship offer from the University of Cincinnati.

In 2013, Kelce signed a four-year contract to start his professional career in American football with the Kansas City Chiefs. Andy Reid, the coach of Jason Kelce, his older brother, oversaw his training. Jason plays center for the Philadelphia Eagles which is one of the top centers in the NFL.

Travis also experimented in reality television, appearing on the dating program Catching Kelce, where 50 young ladies competed for his affection. E! Entertainment Television aired the program’s debut episode in 2016. The show and Kelce’s heart were won by actress Maya Benberry, of German descent. The two dated for eight months before calling it quits at the beginning of 2017.

Who is Kayla Nicole, the girlfriend of Travis Kelce?

The 31-year-old reporter Kayla Nicole, also known as Kayla Brown, has worked for the NBA and BET and previously competed in beauty pageants. She was born on November 2, 1986. Being Travis Kelce’s long-term ex-girlfriend, she is well-known in the field. Right now, she manages a Youtube channel and her fitness company; Strong is Sexy. Savage x Fenty, Rihana’s lingerie line, also counts her as an ambassador.

As an American citizen, Kayla Nicole is one of the most well-known Instagram stars. Nicole was given the name Kayla Brown as a baby. Industry insiders are well aware of her long-term union with Travis Kelce. She also serves as an ambassador and model for Savage x Fenty, Rihana’s lingerie line. In addition, Kayla has conducted interviews with famous people at fashion weeks and red-carpet events. She also uploads exercise videos and vlogs on her Youtube page.

Kayla began modeling when she was a little child. Throughout her modeling career, she participated in pageants like Miss Malibu, Miss California, and Miss Southern Coast Regional. Additionally, she finished as the 2013 Miss Malibu Pageant’s first runner-up.

In addition to modeling and influencer work, Kayla is a social media influencer and an on-air personality. She has additionally hosted YouTube and podcast broadcasts. She has additional experience working at CBS radio station 92.3. She works as a freelance social media influencer at the moment. She also advertises several fashion companies. Strong Is Sexy, Kayla’s Instagram page, claims she has also launched her own company, SIS.

The American city of Los Angeles is where Kayla was born and raised. Nicole was born in California in November 1991 to Roosevelt Brown and Robin Curry. The model’s birth name was Kayla Brown until she changed it to Nicole for an unspecified reason. Roosevelt Brown and Robin Curry have been apart for a while. In addition, her mother, Robin, has remarried.

Although Kayla’s parents divorced when she was a little child, she still keeps in touch with both of them and her stepfather. A younger sister and three younger half-siblings round out Kayla’s family of four siblings. Ayva Curry, Layla-Simone Curry, and Hayda Curry are her other three siblings. Robin Curry and her new husband are the parents of this family.

Has Travis Kelce and Kayla Nicole broken up?

The couple Kayla and Travis, after Kelece broke up with Maya Benberry in 2017, Nicole began dating. Following that, Kayla and Kelce started dating. They experienced a temporary separation in August 2020. Kayla denied Travis’ alleged adultery as the cause of the breakup. The two appeared to have taken a break from each other for a few months; Nicole removed images of the pair from her social media posts during that time. However, they later that year reconciled. In November 2020, she supported her boyfriend while wearing the team colors at a Chiefs game, confirming their relationship.

I’m not sure where you got this stuff, but it’s ridiculous and completely wrong.

Kayla Nicole’s Earnings and Net Worth

According to the sources, Kayla Nicole has a $2 million net worth. Nicole is a motivated and diligent woman, as we’ve already established. She has greatly benefited from her work as a model, social media influencer, entrepreneur, on-air personality, and entertainment journalist to increase her net worth.

Nicole was chosen as one of the top 10 Miss Californias in 2012. Currently, this well-known on-air personality lives a prosperous life in Los Angeles. Additionally, Kayla’s brand endorsements of numerous businesses on various social media platforms aid in the growth of her wealth. As of July 2022, this attractive on-air host earned $700k annually.

Rumors and controversy around Kayla Nicole

The attractive on-air host and the famous athlete were frequently involved in disputes. Today’s piece, however, addresses some of the most significant debates. When their couple returned in 2020, they experienced resentment before breaking up in August.

According to rumors, the separation resulted in Travis cheating on Nicole. But Kansas City’s tide end never believed this claim because it lacked conviction. In May 2022, there has also recently been widespread talk that this pair had broken up again. According to rumors, Travis’ impolite actions were the reason for their breakup.

Nicole has said that in their five years of dating, Travis has never given her an expensive gift; instead, he has required her to cover half of the costs of all outings, including travel and meals, and half of the rent.

In addition, Maya Benberry, the great NFL player’s ex-girlfriend, said that he had cheated on her when they were dating. 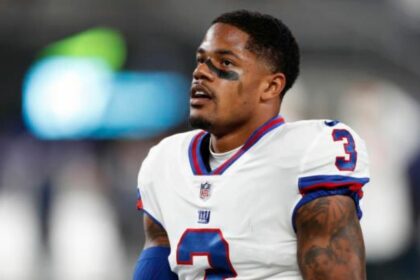 Sterling Shepard Posts a Heartfelt Message for his fans