The way Suryakumar Yadav treated the fiery South African bowling attack with disdain on a spicy Perth where others failed. There is a saying when the going gets tough, the tough get going and he certainly did.

India won the toss and batted first, the decision to bat first backfired on India, as Lungi Ngidi rattled their top order in the blink of an eye. However, coming at number four, Suryakumar Yadav emerged as India’s lone warrior with the bat.

Suryakumar rebuilt the innings with a 52-run partnership for the 6th wicket. While the partnership was looking dangerous for South Africa, Parnell got rid of the crawling DK in the 16th over. SKY (68 off 40) continued his dream run as he reached to his 8th T20I fifty in 2022 before getting out in the 19th over.

It seemed like he was batting on a different pitch altogether as he smashed six glorious fours and three humongous sixes on his way through to a majestic 40-ball 68.

Fans and experts took to their Twitter handles to lavish praise on India’s Mr 360 for his heroic inning that bailed India out of trouble.

Here are some of the best Twitter reactions on Suryakumar’s brilliant knock: 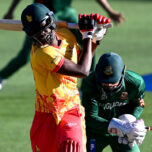