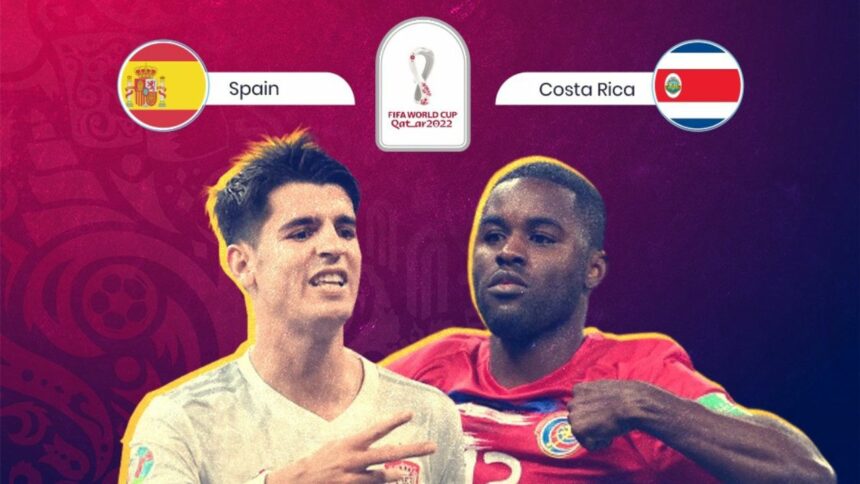 The second fixture of Group E will be Spain v Costa Rica at Al Thumama stadium at 9.30 pm IST. Luis Enrique’s Spain will be looking to secure maximum points to avoid any group stage upset. Los Ticos will be looking to replicate their 2014 performance where they progressed to knock-outs ahead of England and Italy.

La Rojas are entering the tournament with a young squad led by senior pro Busquets. The team will be looking forward to better their performance at world cup after a poor campaign in 2014 and 2018. Costa Rica crashed out from group stage in 2018 and find themselves in a tough group of Spain, Germany and Japan. Costa Rica can draw inspiration from their 2014 campaign where they survived in a group with Uruguay, Italy and England.

The two sides have faced each other in 3 friendly matches with Spain winning 2 of them. 1 game ended in draw. Today’s fixture will be the first competitive tie between Spain and Costa Rica.

Spain are heading into the tournament with a good form. They have won 7 of their last 10 games and lost only to Switzerland. They made it to the Nations League final 4. Enrique’s side have performed well in the last few years with a semi final and runner up finish in Euro 2020 and Nations League 2021.

Costa Rica have won 8 of their last 10 games with majority coming from CONCACAF qualifiers. Costa Rica are not tested against quality opposition yet and it is expected that there will be some struggle. However Los Ticos can cause an upset or two in their group.

Luis Enrique is more likely to go with a traditional 4-3-3 formation with Morata leading the attack and Barcelona trio of Pedri, Gavi and Busquets marshalling the midfield. Enrique has hinted he might use Rodri in different position and there is a possibility of deploying the Man City midfielder as centre back.

Luis Fernando Suarez is expected to field his team with a 5-4-1 formation led by Keylor Navas between the posts. Anthony Contreras will play as the lone striker up front.