Novak Djokovic overcame a tough test from Vasek Pospisil on Friday at the Tel Aviv Watergen Open and seals the Semi-Final spot.

In an entertaining quarter-final clash in Israel, Novak fended off an attacking play from Pospisil 7-6(5), 6-3.

“It was a great, positive win, Vasek is one of my best friends on the Tour. We have known each other for many years. It is never easy playing someone you respect so much and like so much, but we are both professionals and wanted to win the match and you can see that.

“I think the level of tennis was really high. Especially towards the end of the first set and the second set. Credit to him for fighting. Great to see him back.” said Novak Djokovic in the on-court interview. [Atptour.com]

In the first set, both the players made a good start.

Djokovic couldn’t break his opponent as both the players won six service games each to take it into the tie-breaker.

Novak led the tie-breaker 5-2, Pospisil made a good comeback to level it 5-5. Djokovic managed to win the next two points to win the first set.

Pospisil made a comeback in the contest by breaking Djokovic’s serve and levelled the scores 3-3.

Leading 4-3, Djokovic broke Pospisil and served out to seal the match and advanced to the semifinal.

Djokovic has improved to 6-0 in their Head-2-Head stats, having won all 13 sets they have played.

The 35-year-old is after his third tour-level title of the season this week after winning trophies in Rome and Wimbledon.

Djokovic will next play Roman Safiullin after the 25-year-old who won against Arthur Rinderknech 6-4, 6-1 in 69 minutes.

Djokovic will qualify for the Nitto ATP Finals (13-20 November) provided he remains in the Top 20. 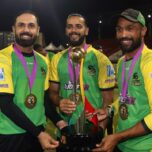 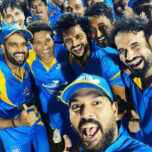