Pakistan booked their spot thanks to the results of other teams in group 2, they finished 2nd behind India after Netherlands knocked out South Africa. Pakistan beat Bangladesh in a virtual quarterfinal to reach the semis.

New Zealand on the other hand reached the semi-final after being the table toppers of group 1 in the ICC T20 World Cup, having won 3, lost 1 and 1 No Result, they gathered 7 points with a superior Net Run Rate compared to second-placed England and third-placed Australia, who also had a similar number of points.

New Zealand and Pakistan will clash for the first time in this edition of the T20 World Cup, but have faced each other 28 times in the shortest format on the international stage, including 6 meetings in the World Cup.

In the 28 meetings so far, Pakistan hold the edge with 17 wins against New Zealand’s 11.

In the 6 T20 World Cup meetings, Pakistan has won 4 times, while New Zealand has won twice.

New Zealand has never beaten Pakistan in a world-cup semi-final. In three past encounters, in 1992, 1999, and 2007, Pakistan have has the better of the black caps.

The two sides played against each other on the eve of the World Cup in a Tri-Nation Series that also included Bangladesh. Pakistan beat New Zealand in the final to seal that series. Now, a month later, they are set to clash in the all-important Semi-Finals.

Top 3 players to watch out for (Pakistan)

Shadab Khan is a dangerous allrounder, his bowling has been fantastic over the year but now he is also lethal with the bat in hand, he has put up some valuable match-winning contributions with the bat in recent times. Shadab has picked up 10 wickets in just five matches at an economy rate of 6.22. Given that the all-rounder is in fine form, he will be one of the players to watch for in the Semi-Finals of the ICC T20 World Cup.

Shaheen didn’t stand up to the expectations at the beginning of the World Cup, The 22-year-old missed the Asia Cup with a knee injury and was still working his way back to full fitness after being out of action for three months. But now it looks like he has regained his form back, The speedster starred with the ball in Pakistan’s victory, against Bangladesh with the figures of 4/22 in four overs. He has found his rhythm and looks very dangerous will the new ball and also has the ability to bowl brilliant yorkers in the death. He is definitely one of the players to watch out for in the clash against New Zealand.

Mohammad Rizwan has not been able to get going in this T20 World Cup so far with only 2 scores in excess of 30, but with an average of 49.63 in his T20I career. Rizwan has scored 103 runs so far in the tournament at an average of just 20.60, his highest score of 49 came against the Netherlands in Pakistan’s 3rd game. but the opening batsman will be dangerous come the Semi-Finals, his experience in playing high-octane matches will come in handy against New Zealand. New Zealand vs Pakistan history in World cups
Next Article 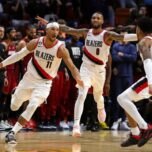