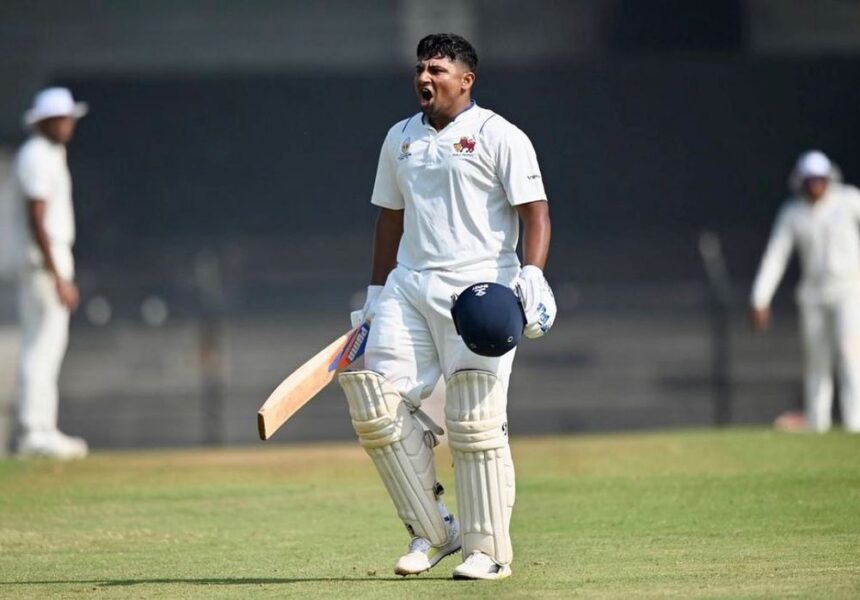 Sarfaraz Khan was once again snubbed by the selectors. Credit: Twitter

The legendary Sunil Gavaskar lashed out at the selectors after Sarfaraz Khan was snubbed from the Indian test side. Sarfaraz has scored a whopping 2441 runs over the last three seasons, yet he’s unable to make the cut to India’s red-ball squad.

India will to take on Australia in the all-important Border-Gavaskar Trophy at home next month. While announcing the squad for the ongoing New Zealand series, the selection committee had also picked the Indian team for the first two Tests of the four-match series against Australia. But once again Sarfaraz, who has ‘broken the door down in first class cricket’, failed to make the cut. This not only angered fans but critics too, as many former cricketers lashed out on social media.

While Sarfaraz continues to stun on the domestic circuit, it clearly hasn’t been enough to impress the cricketers. A fuming Gavaskar said players should be picked on their talent not shape or size. There have been a lot of discussion regarding Sarfaraz’ fitness, but that hasn’t reflected on the field.

‘Yo-Yo test cannot be only criteria’

Speaking to Sports Today, the legendary Gavaskar said, “At the end of the day, if you are unfit, you are not going to score hundreds. So cricket fitness is most important. I don’t have a problem with you wanting to do the Yo-Yo test or whatever it is, but the Yo-Yo test cannot be the only criterion.

Gavaskar didn’t hold back his criticism as he said it the selectors were looking for ‘slim and trim guys’, they might as well go to a ‘fashion show and pick some models.’ Without mincing his words, Gavaskar said, “He is not staying off the field when he is scoring hundreds, he is back on the field again. All that tells you that the man is fit for cricket.

“If you are looking for only slim and trim guys, then you might as well go to a fashion show and pick some models and then give them a bat and ball in their hand and then include them. You have cricketers in all shapes and sizes. Don’t go by the size, but go by the runs and wickets,” signed off Gavaskar.

Sarfaraz opened up to the media and said he was disappointed by the snub. India will take on Australia in the four-match Test series, starting on February 9.

Several former cricketers came out in support of Sarfaraz.

Taking to social media site Twitter, Harsha Bhogle came out in support of Sarfaraz. “Very hard on Sarfaraz Khan who has literally broken the door down in first class cricket. You can’t do more than he has,” wrote Bhogle.

Meanwhile Aakash Chopra wrote, “There was a bit of an opening in the Test squad. Wwas hoping that Sarfaraz will make it to the squad. He’s done everything that one could do to deserve a call-up.”