We have arrived at the last week of the Group stages and it’s time for Bangladesh to lock horns against India at the Adelaide Oval.

India comes off a loss against South Africa in the previous game. This was their first defeat in the tournament. Previously, they kickstarted the event with a win against arch-rivals Pakistan in a tight match. In the next game, they defeated the Netherlands comprehensively. India with 4 points from 3 games and are in the 2nd position in the points table.

Virat Kohli and Suryakumar Yadav have been in good form for India with the bat. Rohit Sharma and Hardik Pandya have blown hot and cold. KL Rahul’s form has been a major issue for the Men in Blue. There could be a probability of Rishabh Pant playing tomorrow as per reports with Dinesh Karthik with a sore back.

When it comes to bowling, Arshdeep Singh has been a brilliant to start off with the new ball and has been ably supported by Bhuvneshwar Kumar and Mohammed Shami who have also made some valuable contributions.

Bangladesh have been hot and cold in the T20 World Cup so far. They started off with a win against the Netherlands and in the next game, took a hammering against South Africa.

In the next game, they won a thriller against Zimbabwe and made sure that the qualification changes gets firmer.

Najmul Hossain Shanto played a well-steered innings in the previous game, scoring 71 runs from 55 balls. Afif Hossain has been the other positive but as usual, has failed to convert his low scores. The middle order has been a matter of concern for Bangladesh for certain.

Taskin Ahmed has been one of the positives for Bangladesh with the ball in hand and Hasan Mahmud has been very impressive at the death along with Mustafizur Rahman.

In 11 matches they have been played, India have emerged as the winners on 10 occasions while Bangladesh one victory to their name. Out of 4 matches played in T20 World Cup, India have won 3 matches and Bangladesh have won just 1.

The pitch at the Adelaide Oval is expected to be a belter. Although the fast bowlers will get pace and bounce, it could be difficult for them to contain the scores with short boundaries on either side. A total of around 160-170 will be the par score on this pitch. The team who wins the toss will look to have a bowl first as teams chasing have had a good record on this ground.

India will enter this game as hot favourites and are expected to steamroll the Bangladesh side. 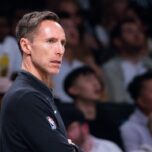